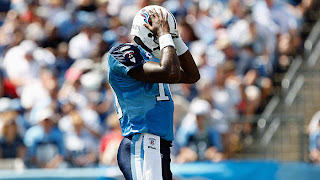 I know for me and other people, it's become a sort of running gag when something bad happens to say this to someone, knowing full well the "something" we're talking about won't be easily shook.

This week though, when I was watching the Monday night game between the Packers and the Bears, something hit me. After every snap, any professional football player who wants to be one of the best , who wants his team to win, really does have to  "shake it off".

"It" could be throwing an interception, blowing a tackle, comitting a stupid penalty, or getting lit up like a Christmas tree by a Pro-Bowl linebacker.


Regardless, if that player wants the next snap to have any chance of resulting in success, he's got to let "it" go - and fast! In most cases, the player has all of about a minute to take his mind off the last play to prepare for the next.

And can't you tell when he doesn't? Isn't it so obvious when the opposing team is able to get "in a player's head," and his play suffers throughout the rest of the game?

Get ready. I'm about to get philosophical.

Here's my thought: What if I was able to "shake off" every poor result in my life in less than a minute? What if I could look at each mistake, each failed attempt, and disappointment and recognize that it was just one "play" in a very long game?

Of course, I am the only one who could say what "winning" my game would look like when the clock runs out. But how much more likely - and much more quickly - would I be able to accomplish the win just by letting go of what didn't work?

And even if I "lost", what would the experience of playing the game be like?

It seems to me, it would be exhilarating, intense, inspiring because it would have been all of me in the game all the time. I would still go back and "watch the tape" to really get my mind around what didn't work, but there would be no time to wallow or luxuriate in it.

As a matter of fact, wouldn't it even be great to shake off a win, too? Think of the players who have been so in love with their own talent and accomplishments that the game, and his team, took second place to his own ego. (Can you say, T.O.?)

I agree with Keith Olbermann?!?! Anyone hear...did Hell freeze over?

Never thought I'd hear myself say this, but here it goes: "You are right Keith! Preach on, brother!"

Keith Olbermann was commenting on the alleged "harassment" of Azteca "reporter", Ines Sainz, when she was in the New York Jets locker room Monday.

I could not agree more. Ines Sainz is nothing more than a piece of eye candy for Azteca and everyone knows it - including her.

Listen, as I woman, I know what reaction I'm trying to elicit or what impression I'm trying to create when I put myself together every day. There are certainly different "themes": job interview, baby shower, beach day, date night....girls night out. Each theme has a different make-up application. Some call for stilletos and thigh-highs, others call for a ball cap and sneakers.

I'd be willing to bet Ms. Sainz has pondered over these kinds of choices, as all women do.

So, you tell me: what reaction...response...impression....was she trying to create when she made the choice to wear this? 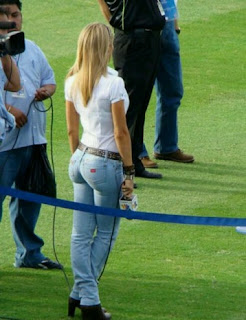 ﻿As I heard one woman say on a call-in sports show this morning, "She dressed to get attention and attention is what she got!" Exactly.
Ms. Sainz made a choice when she painted those jeans on - and choices have consequences.
Would any reasonable, rational person - even a reasonable, rational feminist - expect a locker room full of intense and competitive men, coming down from an adrenalized testosterone high, to "mind their manners"?
I think it is a shame that the Jets players chose to react the way they did to this calculated choice by Ms. Sainz (and her producers) to show up for "work" dressed this way. The players could have made a choice to treat her like any pudgy, middle-aged male reporter in the locker room.
Which brings up another good point by Olbermann: "Ultimately, what the hell are reporters doing in locker rooms anyway?"
What upsets me the most about this? I had to agree with Keith Olbermann. Damn.
Posted by Heather D. at 9:46 PM 5 comments:

I was watching pre-season football games wrap-up and started to think about sleep when it occured to me, "Lots of these guys won't be sleepin' - no way."

After all, how could they? Imagine the suspense as Saturday approaches and teams are mercilessly cut down to 53 men. If it were me, I would be lying in bed playing every snap from every practice and every pre-season game over, and over again in my mind.

Tonight was the last time that some of these players will get to take the field with an NFL team. For others, life "on the fringe" begins - waivers, practice squads, trades - but no starts.
And frankly, how many of them would we even remember or recognize?
Made me think about Cinderella...
Made it to the ball, dressed to kill, danced with a hot prince, had a glass of bubbly...and still ended up going home in a pumpkin.
Posted by Heather D. at 10:14 PM No comments: