There have been a lot of colorful adjectives used to describe Al Davis over the years – some scathing and others admiring. With his passing this last weekend, people have been reflecting back to see what made this man the extraordinary figure and force that he was for the NFL.


One thing that most might miss: Did you know that in 1997 Al Davis hired the first female CEO in the NFL?  Her name is Amy Trask. And she is STILL the only woman in the NFL with those credentials.
Amy Trask grew up in Los Angeles and graduated from University of California, Berkeley with a degree in political science and a law degree from the USC Gould School of Law. She became a fan of the Oakland Raiders while at Berkeley.


“I did an internship for the Raiders [1983] while I was in graduate school in Southern California. It had long been a dream of mine to work for the Raiders,” Trask has said.
After completing her degree in political science in 1985, she worked for a law firm in L.A. But two years later, she reunited with her Raiders’ and Al Davis, who had remembered the young intern.


In 1997, Davis promoted Trask to the top post inside the Raider Nation. She’s still there today, and all reports indicate she will be for a long time to come. 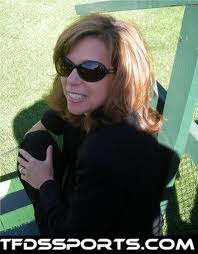 In interviews, Trask has shared that one of the guiding principles of the Raider organization is that young people should chase their dreams, no matter how ambitious. “I dared to dream. It's a message we should carry to young women everywhere, and even little girls. Take advantage of your opportunities. Don't sell yourself short.”


What  has she said about working for Al Davis?  In an article by Whitney Holtzman, espnW.com, she was quoted as saying, “It's a privilege and an honor to work for him and for the organization.”
Away from football, Trask is an avid animal lover – she even serves on the board of directors of the Animal Rescue Foundation - loves horses and equestrian activities and reportedly, her favorite food is “desert”. This is a woman I want to call my “B.F.F.”


In a world built by testosterone and in an organization denoted by masculine bravado, to have an inspiring, idealistic woman with a heart at the helm seems like a pretty progressive move by Mr. Davis. I think he should be credited for that.
And if you think about it, that’s who Al Davis was for the NFL: a man who could recognize talent and was willing to bet on it.


From Larry Garcia of RaiderDrive.com, “Al Davis hired Art Shell, the first African-American coach in the NFL; and how about Super Bowl coach Tom Flores, who was the first Hispanic coach in the NFL? John Madden had no head coaching experience, but he took the Raiders to AFC championships, playoffs and a Super Bowl. Gruden turned the Raiders around and made them both a playoff contender and a championship caliber team.”
Thanks to Larry Garcia for this toy box full of great information about Amy Trask. Take a minute to check out the entire article, it’s a great read!


http://www.raiderdrive.com/amy_trask.htm
Posted by Heather D. at 10:44 PM No comments: