I have never been to Wisconsin. I have never liked cold weather. I would never wear an enormous slice of fake cheese on my head, although I do like brats.

But let me tell you, this weekend I will be leading the parade in front of the Green Bay Packers band-wagon! They are now MY TEAM and I’ll be cheering my lungs out for them this weekend. I want them to win it ALL!

Ever since Brett Favre waved goodbye to Green Bay with his tear-soaked hanky in March 2008, Aaron Rodgers has been nothing but classy, composed and competitive. Amidst the endless circus of media and mayhem that has been the “Favre Follies” for the past 2 ½ years; Rodgers kept his mouth shut, and kept improving.
﻿ ﻿
This year, Favre hit an all-time low – looking more and more like a desperate, middle-aged, pervy uncle than the hero he had been in Green Bay the day he rode out on his white horse. Fast forward to the end of his career (let’s hope) on the frozen ground in Chicago in December. And the rumors that he couldn’t keep the fly to his “real. comfortable. jeans.” zipped up. No end could have seemed more pathetic and anticlimactic for a man who seemed destined to be a beloved legend.
Now, nothing could be a more fitting closing comment on Favre’s football epitaph than the bitter irony of “the back-up,” Aaron Rodgers, rising to the top, when Favre has hit bottom.
God speed, Mr. Rodgers, and “Go, Pack, GO!” 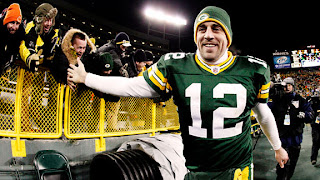 Roman culture tells us of the gift-giving gesture of Saint Nicholas, whose acts of compassion for those in need evolved into the idea of charity within the Christmas holiday. Today, we often refer to this time of year as the “season of sharing.” So it’s ironic that when former Cincinnati Bengals wide receiver, Chris Henry died just before the holidays more than a year ago, a most charitable season of sharing emerged.

On December 16, 2009, NFL star Chris Henry died from injuries suffered when he fell from a moving vehicle. Although the tragic incident initially received some national attention, it quickly faded away. Very recently, a final redeeming chapter emerged from a very sad story.

Chris Henry’s mother Carolyn Henry Glaspy, was devastated by her son’s senseless death and made a decision in hopes of furthering the meaning and value of his life. Although Chris had not signed up to be an organ donor himself, when his mother realized that his passing was imminent she chose to have his organs donated.

In all, four individuals’ lives were saved with Chris’ lungs, liver, kidneys and pancreas. Just recently those individuals and their families had the opportunity to meet Carolyn personally and thank her for her most unselfish act. Donna Arnold was one of those recipients, getting a kidney and pancreas. Her husband poignantly said about Carolyn and the experience, “Life is not about the breaths that you take, but the moments that take your breath away…this was one of those moments.”

Chris Henry’s last season was not played on a football field, but in the lives and families of these organ recipients. It was most definitely his finest season. So as I wrap up this year, and reflect on how my 2010 season is concluding, I’m so proud of Carolyn Henry Glaspy’s courage, compassion and commitment to make people aware of the importance of organ donation. And I reflect upon a moment more than ten years ago, when at a small reservation health fair I learned about the disparity of organ donation in Native communities. Recent statistics said that only 12 Native Americans donated an organ in a year when more than 1,400 Native Americans were on the transplant waiting list. So I sat at a little table and registered to become an organ donor.

I doubt my story or my moments will ever make national news, but on this day and in this moment, a professional football player, his mother and a woman from a tiny town on the Navajo reservation share something special. And it takes my breath away.

* Please consider joining me and the 90 million Americans who have signed up to be an organ and tissue donor at www.donatelife.net
Posted by Heather D. at 12:56 PM No comments: