Giddy Gives Way to Guilty as the NFL Season Kicks Off

I’ve never related to my addiction to NFL Football as a problem - time consuming, for sure, costly in the pizza and wings department, absolutely. But as the season kicked off this week, I started to hear some things, read some things and consider some things I had tried really hard to ignore.

I’m sorry to say, I now have to look at my passionate fandom as a guilty pleasure.

For years now, this last year especially, so much has surfaced about the life changing nature of the injuries these gridiron warriors endure - especially the brutal consequences of concussions. With the news of  “Bountygate,” players intent on taking each other “out” for a game, or even a season, it takes an even nastier turn.

Then I was reading in ESPNMagazine, in a great article by J.R. Moehringer, about suspicions that the neurological damage caused by concussions, known as “subconcussive injuries”, could be at the source of recent player suicides.

Moehringer notes, when Titan’s wide receiver, O.J. Murdock, killed himself this July, he became the SIXTH former or current player to commit suicide in the past 2 years. Each of these players reportedly suffered symptoms of chronic traumatic encephalopathy (CTE) – headaches, slurred speech, psychosis, depression, dementia, and memory loss. 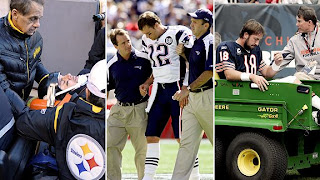 One player, Dave Duerson, left a suicide note for this wife that said, “Please see that my brain if given to the NFL’s brain bank.” He shot himself in the heart.

Another 500 players have signed waivers willing their brains to the center. One of them being Matt Birk, a 15 year center for the Ravens. He says this is his way of giving back to the game and helping future players. But he says, “It’s too late for me.”

Even if injuries are not life ending, they certainly could kill quality of life for these guys, especially as they age. There are countless players – current and retired – with metal plates holding their extremities together with joints that have been rebuilt in surgery. You’ll hear them in interviews joke casually about the pain of getting out of bed in the morning and the ringing in their ears.

So, it’s not exactly breaking news to say that this is a brutally violent sport with physical consequences. Anyone who has ever seen even one game can imagine the damage being done.

I know that for me, when I would witness the vicious hits, the nauseating injuries, I would just say to myself, “Well, it’s their choice”.

In the same issue of ESPN Magazine, 48 players were surveyed about injuries and concussions. Are you ready for this? Of the guys polled, 54% say that if they suffer brain damage as a result of playing in the NFL, it’s still worth it.

Another question asked: If you could win Super Bowl MVP, but it takes 5 years off your life, would that be worth it? Almost half, 48%, respond yes. One NFL veteran lineman says, “Hell yeah! And at the rate I’m going, I’m probably going to be in a wheelchair for the last 10 years of my life anyway.”

So, there you go. They don’t have to play football. There are other professions, other sports, and other ways to compete. If it’s their choice, why should I feel guilty?

Even if their passion for the game outweighs their concern for long-term physical disability, that just makes me an enabler. Even a player who says that football was their “only way out” of a life headed nowhere that makes me the person who agrees with them. “There was no other way,” I’m agreeing.  The truth of the matter is that my beloved NFL Sunday Ticket package, each carefully selected fantasy player and every jersey I buy keeps the games in motion and in demand.
This leaves me with a question: to watch or not to watch?

Here’s what I’ve decided: I will honor the passion and commitment these men have for what they do. After all, I can’t think of a profession I would be willing to risk my life and limb for in this way. There’s something primal and strangely honorable about it. In fact, this depth of passion is something I truly admire and part of what draws me to this game.

So, I will be cheering for you, guys…and quietly praying for you, too.
Posted by Heather D. at 10:21 AM No comments: