5 Ways the NFL Draft Is Like the Miss America Pageant

You should know, I have a passion for NFL football unmatched by most fellas I know. I have been counting down the days to the kick-off of the NFL draft this week.


I was reading up on the expected top picks, and the stories of these players’ journeys to the draft – years of Pop Warner football, touch football in the neighborhood, and college fame. I asked myself the question: “Is there a female equivalent of the NFL draft?”

I scratched my head as I thought about it. Where, in what venue, are woman assessed for talent and training that they’ve been crafting for years and years of their life, with a single objective, and massive public exposure? 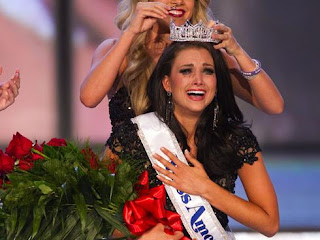 Then, it hit me: The Miss America Pageant.

Stay with me here.

The women in these pageants are the product of years of intense focus on their beauty, grace, poise and “assets”. They have been coiffed and pampered from top to bottom (literally), a millions times over. Some got started as soon as they could pull up their own Pampers.

C’mon, don’t try to pretend that you haven’t guiltily soaked in an episode of “Toddlers & Tiaras”.

Let me get specific about some similarities:

So, let’s call it like it is: “let-us-see-what-you-look-like-almost-naked” competition.

Every year at the NFL combine, about 350 or so would-be-NFL-draftees compete to be ONE of the roughly 250 men selected in the draft each year. Sure, they are there to have their football skills assessed, but let’s face it – they are being sized up much like Miss Georgia in a one-piece.

Some may regret this objectification. 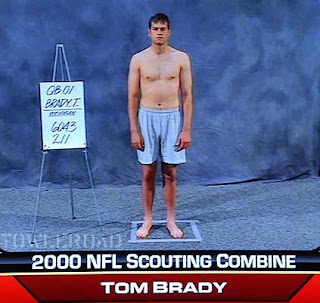 Others, should look into opportunities to model underwear if the aren’t selected in the draft. 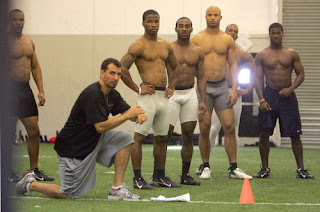 So, there is no baton twirling at the NFL combine, but these guys do have skills and they are assessed from every angle. Like, “can you take a snap from center?” No idea what that means? Take a look.

As for the ladies, last years talent competition offered everything from classical ballet en pointe, playing to flute, Celtic fiddle and even a jump rope routine. Singing seems to be the “go-to” for the gals – not always for the best.

To be part of the NFL draft, players must take The Wonderlic Cognitive Ability Test (formerly known as the Wonderlic Personnel Test. Per wonderful Wikipedia, this is a popular group intelligence test used to assess the aptitude of prospective employees for learning and problem-solving. It consists of 50 multiple choice questions to be answered in 12 minutes. Sample questions:
Well, how about Miss America? How are her wits tested? We’ve all seen these beauty pageant interviews, mostly underwhelming, and sometimes embarrassing.

However, in a column called “What I Learned About Interviewing from Miss America” by The Daily Muse in Forbes Magazine, she brought up some interesting points.

“Imagine walking into a room with six pairs of eyes immediately fixed on you. Each of those six people are chomping at the bit to ask you the most difficult questions they can come up with—politics, controversial issues, your personal life, you name it. They’re testing you, challenging you, and trying to prove that you aren’t good enough. And they’re judging you. Literally. After grilling you for a painstaking 20 minutes, each person will put a score next your name.”

4. A “combined score” for performance based on different parts of the competition

For Miss America, this is what the measuring stick looks like to see if she is fit to wear the crown.

Preliminary Competitions and their score values:

For players looking to be valued at the top of the NFL draft, here are a few ways they are sized up: 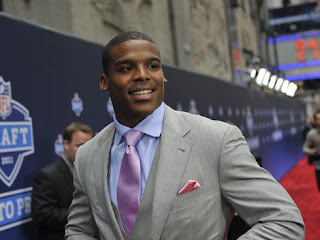 Ok, I admit, this is a bit of a stretch. But, some of these guys are dressed to the nines, flaunting their individual and looking GREAT for their big day. Thanks for that, guys! Check it out…there’s even a slideshow!

I wouldn’t think it would be necessary to point out the differences between the NFL draft and the Miss America Pageant, but here are a couple things I found interesting.


Per NFL Commissioner, Roger Goodell, the average NFL player is in the league and getting paid to play for 6 years vs. Miss America, who gets to wear the crown for only one year

The scholarships awarded to Miss America totaled $52,000 in 2012 vs. top draft pick, Cam Newton, who was guaranteed $22 million for his 4 years deal with the Carolina Panthers.

So, brawn beats out beauty in the free market. Anybody feel like taking a stab at where “brains” might rank?


First contributed to, and published by HelloGiggles!
Posted by Heather D. at 3:58 PM No comments: