Why is this pre-season "Must See TV"?

Question: Why bother taking up space on your DVR and time away from your fading summer to watch pre-season NFL football?


The average NFL fan knows that the games don’t really predict anything about their favorite team’s season. And there’s no point in paying too much attention to most of the new guys. They’ll more than likely be cut or relegated to the practice squad. 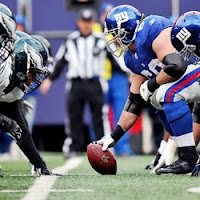 The players – the ones who have contracts and rosters spots in place already – want little to do with it. After all, each pre-season snap increases their chance of injury and it’s not really “worth” their time. Players only make a few thousand dollars during the preseason. The big bucks only kick in once the regular season starts.


These teams haven’t had any offseason meetings, no OTAs (offseason training activity) no minicamps, nothing. Many of these guys only met their coaches for the first time just a few days before training camp started. So, what we’ll see for the most part is sloppy football from lack of practice.
So, why watch?


I’ll tell you why: This preseason might be the most important in the history of the NFL.

At least for rookies and guys on the “bubble” this year who only have 4 games and stunted training camps to “wow” coaches. That’s a tiny window of time to either grab a roster spot or find themselves back at work at the carwash in Muncie, Indiana.
To quote comedian Jay Mohr’s post on Twitter, before the Jets played the Texans on Monday, “I am freaking pumped for JETS football tonight. Love 4th qrt in preseason. 1 missed tackle is 1 lost career.”
And there you have it – watch because during the 3rd and 4th quarters of these games, you just might catch some pretty fantastic football. Remember, each player in the NFL was one of the BEST players and athletes on any college football team and they have their lives – at least their life’s ambitions – at stake. To me, that’s a game worth playing and worth watching.
Posted by Heather D. at 2:43 PM No comments: