My First "Crush": How I Fell for Football 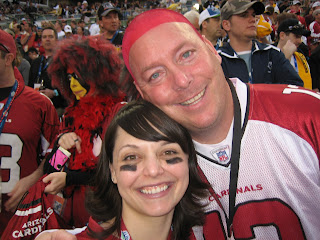 With the NFL season in full swing at last, so is my obsession. Life is arranged around games that I don’t want to miss. Of course, in this busy, busy life I can’t sit down and actually watch the games I care about as they kick-off. Especially now that there are games not just on Sunday and Monday, but on Thursday night, too. Thank goodness for DirecTV and DVR.

I end up recording three to four games a week, the ones most important to me: one of my favorite teams is playing, or it’s one of the week’s most competitive matchups. And once those games have kicked off on Thursday, Sunday and Monday, I’m ignoring Facebook, Twitter and most news outlets to avoid “spoilers”. I’m also texting clear instruction to friends and relatives that they better not text me any news, or cheers, or jeers that could tip off the outcome of these games.

I did keep myself out of the fantasy leagues this year – somehow. I was trying to avoid feeding my pre-occupation with football during the week to try and get more done this fall in real life. Frankly, I regret it. I miss that personal stake in those games. I won’t make that mistake next year.

This week, as I was making my pre-game plans and preparations, I thought, “How did this all start? This passion for a ‘boys’ game?” No one in my family played football. I only ever dated a boy that played football once – my freshman year of high school.

With that question, I was rewarded with a warm memory.

There I am, 6 years old, at home in Colorado. I am sitting at the dining room table with my mom and dad and the Rocky Mountain News. It’s the Sunday paper, open to the sports section with the upcoming NFL Sunday games schedule. Around the edge of the page is a border, pictures of the helmets of each team in the league. My mom and dad are encouraging me to match up which helmet belongs to what team.

That was so much fun, and I was a really good guesser, too. At least, that’s what my mom tells me.

Then another memory: John Elway was drafted by the Baltimore Colts (yep, they used to be in Baltimore, but that’s a whole other story….) and traded to the Denver Broncos. I was only 9 but I remember the heated discourse between my mom, my dad, my grandpa and my uncles – I think one of my aunts even piped up - about this Elway guy. Was he the real deal? Was this the man to return Denver to “Orange Crush” glory?

John Elway actually made a permanent mark in our family’s history when he autographed a pizza box for my uncle at a place just a couple miles away from our house. It’s a story that gets told again and again – sometimes embellished – during family gatherings. 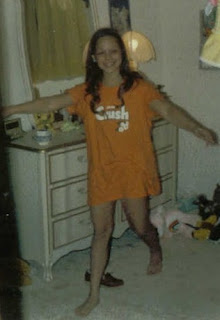 Then there was my 11th birthday, Dec. 30th, 1984. In his second year, Elway had led the Broncos to the AFC Divisional Playoffs. The whole family was there and cake and presents were set to follow the game. I even had on my favorite Orange Crush t-shirt, like a true fan. It was about to be one of the best days of my young life.

Only one problem - they lost, 24-17 to the Pittsburgh Steelers. I was inconsolable. There’s picture of me at our kitchen table, cake front and center, presents, even a new Barbie, but my expression is one of utter despair. I wish there was a digital copy I could post, but it’s firmly planted in a family scrapbook.

Roaming down this memory lane, it became clear that I had for sure inherited my passion for the pigskin. I guess it’s no coincidence that I went on to be a cheerleader, or that the man I married ended up working for the Arizona Cardinals. Almost seems like destiny, don’t you think? Actually, I’m kind of surprised I didn’t end up being a mascot…